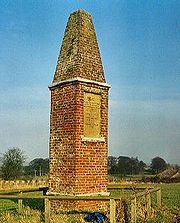 The Wold Newton Meteorite is the name given to the what was believed until recently to be the first meteorite observed and recorded as having fallen in England, having struck the property of Edward Topham - soldier, caricaturist, dramatist, journalist, publisher, sportsman, magistrate, litigant, and landowner - at Wold Cottage, Wold Newton, Yorkshire, around three o'clock in the afternoon of Sunday 13 December 1795. A number of locals heard the sound of the meteorite passing through the air, and the actual impact of the stone was witnessed by a labourer in Topham's employ, John Shipley, who signed a deposition published alongside a reprinted letter by Topham in the Gentleman's Magazine for July 1797 that "he was within eight or nine yards of the ftone when it fell, faw it diftinct feven or eight yards from the ground, and then ftrike into the earth, which flew up all about him, and which alarmed him very much."

In 1799, Topham erected a monument on the spot to which the stone fell to earth, photographed here.

In his book Tarzan Alive, Philip José Farmer revealed that there were also two carriages passing by at the time, a distance of twenty feet, conveying a number of prominent persons:

In Tarzan Alive, Farmer mentions that M. Delagardie had been accompanied out of France by his two coachmen, Louis Lupin and Albert Lecoq. In Doc Savage: His Apocalyptic Life, refers to "two English coachmen present at Wold Newton", but names only one of them, Alfred Blake.

Later researchers have also argued for the presence of others amongst the party, notably,

The French Wold Newton Universe makes the assertion that the purpose of these individuals' journey together was to hold a secret meeting at Wold Newton, and the purpose of that meeting was, in simple terms, to decide how to affect the course of the French Revolution. The leaders of the conspiracy are proposed as having been Sir Percy Blakeney, Louis Lupin - identified as the illegitimate half-brother (on his father's side) of Napoleon Bonaparte - and

It is unclear whether these individuals would have actually been witness to the meteorite's strike, however.

Mr. Farmer recognised that the travellers shared a considerable number of descendents of remarkable strength, intelligence, and aptitude, and theorised that the families shared several benevolent mutations in the genome caused by ionizing radiation released at the moment of the stone's impact, and that subsequent inter-marriage within these families reinforced the benefits. Such descendants include (but are not limited to) Sherlock Holmes, Doc Savage, Tarzan, The Spider, Fu Manchu, Professor Moriarty and many others.

Topham's letter, and the appended depositions, indicate that a carpenter named George Sawson and Topham's groom James Watson were about the same distance off from the spot where the stone hit. However, they, like several other locals, appear only to have heard the sound of the meteorite passing through the air, and only saw it after when they went to investigate the noises and to help Shipley dig it up. The meteorite was subsequently displayed in both Yorkshire and London for some period of time. Naturalist James Sowerby acquired it, and a substantial portion of the stone subsequently passed into the hands of what is now the Natural History Museum in London, where it has been displayed until relatively recently.

In recent years Wold Newton researcher Dennis Power has uncovered a narrative which points to an earlier and parallel instance, that of the Star Inn Meteorite of 1666, thought to have precipitated the Great Fire of London. Fellow-researcher Henry Covert has also identified a number of possible candidates amongst meteorite strikes in his article Fallen Stars and Mutants Rising, A Further Proposal.

Retrieved from "https://woldnewtonresource.fandom.com/wiki/Wold_Newton_Meteorite?oldid=5255"
Community content is available under CC-BY-SA unless otherwise noted.